Home » How does the PSMC5 gene actually differ in Ollie and Yoni? Dr. Galen Collins, our Research Fellow, explains.

How does the PSMC5 gene actually differ in Ollie and Yoni? Dr. Galen Collins, our Research Fellow, explains. 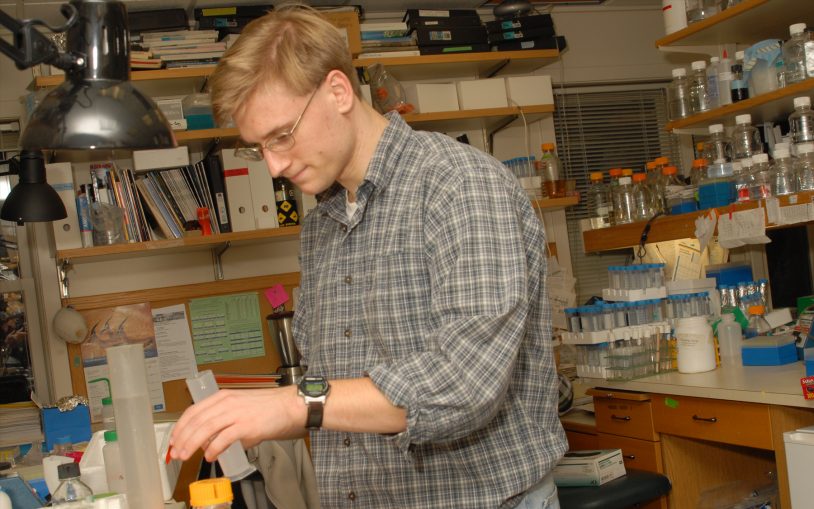 PSMC5 is one of over 30 genes that together encode for proteins which are built into the 26S proteasome – a group of proteins that cooperate to remove or recycle other proteins in the cell.

Proteins are degraded by the proteasome for many reasons. Some proteins are routinely destroyed to keep cells responsive to changes in its environment or direct cells through its cell cycle. Some proteins are removed as part of quality control process in the cell. Proteasomes degrade incorrectly folded proteins or proteins made in excess of the other proteins. Many scientists consider defects in this quality control a significant cause of many age-related neurodegenerative diseases such as Alzheimer’s, Parkinson’s, and Huntington’s diseases.

The degradation of proteins by proteasomes must be tightly controlled so that cells do not randomly destroy most of its proteins.

One control mechanism is that the actual step of breaking apart proteins occurs inside the proteasome. Parts of the proteasome, known as gates, restrict access to this destruction chamber. For a protein to get inside proteasomes, it must first be recognized by proteasomes as a target, then unfolded to a narrow ribbon of amino acids which can squeeze into the inner chamber of the proteasome once the gates open.

Although we know the genetic change in PSMC5 shared by these boys, we do not know why one defective copy of the gene is enough to cause problems.

There are two possibilities. In one scenario, the problem is there are not enough “good” proteasomes to carry out the work. In this case, if we make a few more proteasomes with the “good” copy of PSMC5, then cells should work more normally in its process of protein degradation. Alternatively, the “bad” copy might not be doing nothing, but causing proteasomes to jam. Making a few more proteasomes will not fix this problem. If we were to put in just a little bit of the altered version of PSMC5 we could cause protein degradation in normal cells to slow down.

This is a straightforward hypothesis to test. To test this hypothesis, we have collected cells from both boys and their family members. We have also generated cell lines that are normally studied in labs but modified (using CRISPR/Cas9 technology) to only have one functional copy of PSMC5. We can now use modified RNAs (essentially the same technology used by Moderna and Pfizer to make their COVID-19 vaccines) to put a “good” copy of PSMC5 into cells with only one functional copy of PSMC5 or the altered PSMC5 gene into otherwise normal cells. Then we can check to see which of these two scenarios is at work.

One of the striking features of these boys is how active and otherwise healthy they are.

The cells we have collected also rather healthy. So why did this genetic change lead to problems in neurodevelopment? One hypothesis we are testing is based on our observation that cells often have more than enough proteasomes. There are likely a few occasions in life where these “extra” proteasomes are required to handle a sudden burst of damage to proteins or in major developmental changes.

Initial observations suggest that this mutation increases the ATP that is normally consumed by proteasomes.

That is a surprising finding. It might suggest some defect in the cooperation of the ATPases, and decrease in protein unfolding rates, or an impairment in recognizing the appropriate target proteins.